The landing gear is often neglected in helicopter design. But we have noted landing gear resonance induced by cyclic loads may have a negative impact on precision and stability of FBL helicopters. The landing gear can be the root cause of high frequency, high energy vibrations.

Undercarriages are particularly prone to amplify vibrations leading to resonance if critical frequencies are hit.

Some basic physics calculations, corroborated with experiences from test mock ups, have provided information that common undercarriage designs made from molded plastics or CNC + CF plate may start resonating. The use of molded plastic for the Oxy3 landing gear was considered a pre-requisite to keep costs down and provide a degree of protection during hard landings.

To decrease vibration and minimize the chance of landing gear resonance, the design team decided on a design incorporating different front and rear arches, in order to avoid cross-induced amplification of vibrations. At the same time we were trying to keep the expected vibration frequencies far from those which would induce resonance.

In the graph above is a comparison of analytical results of traditional gear design (dotted line), compared with the actual Oxy3 asymmetrical gear design (solid green line), at different frequencies of forcing loads (Cyclic loads induced by the main rotor: 3000-4500rpm, which corresponds to 60-75Hz, and tail vibrations at 18,000-20,000rpm, corresponding to 300-333Hz).

We calculated the amplitude of displacement of the skids (vertical axis, in mm: note the logarithmic scale) are compared for both designs, showing the simultaneous benefit of having split the resonance peak in two, and moved towards higher frequencies far from the cyclic load frequencies, and lower than tail induced vibrations. We managed to obtain a significant reduction in global vibrations – to well within an acceptability level. 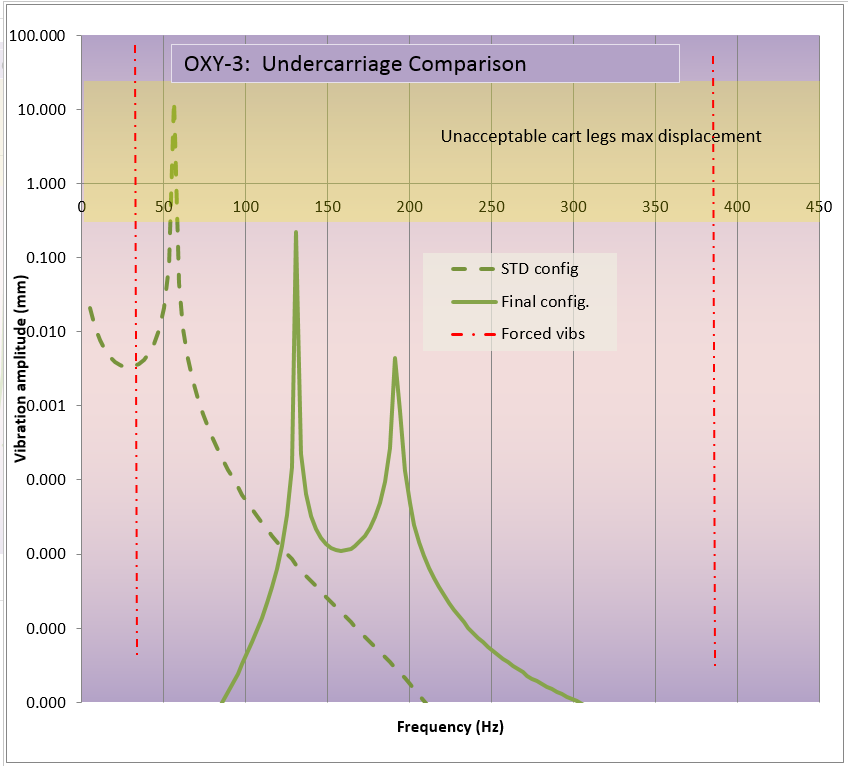